New Technologies of World War I: A Supplement for "Voices from the Great War" 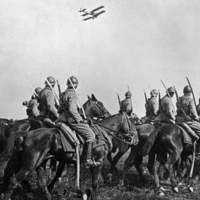 World War One was the result of the western world’s untethered industrial power during the late nineteenth century and early twentieth century. The fields of air, land, and sea warfare were forever changed through the advancements of chemical, armored-vehicle, naval and aerial technologies. An attitude of experimentation led to technological advances that were constantly improved upon between 1914 and 1918. As a result, the world witnessed the largest amount of death and destruction it had ever seen.

The individual experiences of people in the U.S. and Morocco differed depending on their position in society, but they were...