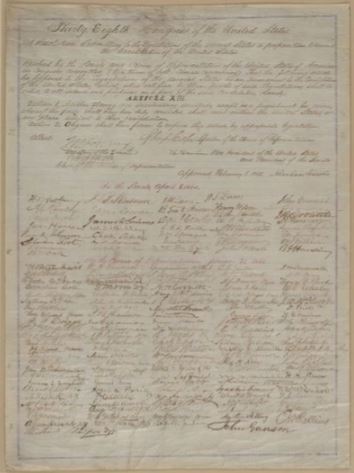 Resolution of the 13th Amendment, submitted and signed by Abraham Lincoln, as well as being signed by Congress.

“Neither slavery nor involuntary servitude, except as punishment for crime whereof the party shall have been duly convicted, shall exist within the United States, or any place subject to their jurisdiction.”

The amendment to the Constitution of the United States was struggling to pass until Lincoln won his re-election and pressed his advantage for its success.

In reaction to the 13th Amendment, many Southern states enacted their own “black codes”, which were inherently about keeping African Americans depend upon their former owners.

As the struggle for independence continued into the 20th Century, two more Amendments were passed as a follow-up:

1) The 14th Amendment: This amendment declared that all persons born or naturalized in the United States are American citizens, including African Americans.

2) The 15th Amendment: This amendment prohibits each government in the United States from denying a citizen the right to vote based on that citizen’s race, color, or previous condition of servitude.