Globally, medical and scientific advancements were made at the expense of the enslaved population. To a small extent, enslaved peoples were protected due to the economic aspect of owning slaves, but this protection was not guaranteed nor was it universal. 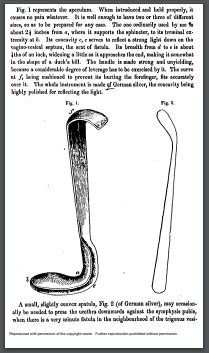 The illustration above features two of Sims's most notable tools, the speculum and the spatula. The speculum was a tool designed by Sims during his surgeries on Lucy, Anarcha, and Betsey, three enslaved women he owned.

Perhaps the most notorious case in the United States was that of Dr. J. Marion Sims. During the mid-19th century, Sims practiced and developed his techniques on three enslaved women, Lucy, Anarcha, and Betsey, in Montgomery, Alabama. Sims was able to find techniques to cure vesco- and rectal-vaginal fistulas, but the procedures and experiments were extremely painful, as he often operated with no anesthesia. He often dosed Lucy, Anarcha, and Bestey with high amounts of opium during their recovery, which frequently led to situations where he was able to coerce them into consenting to more procedures.

Sims is remembered, memorialized, and celebrated as the “Father of Modern Gynecology” while these women, and countless others, are forgotten. 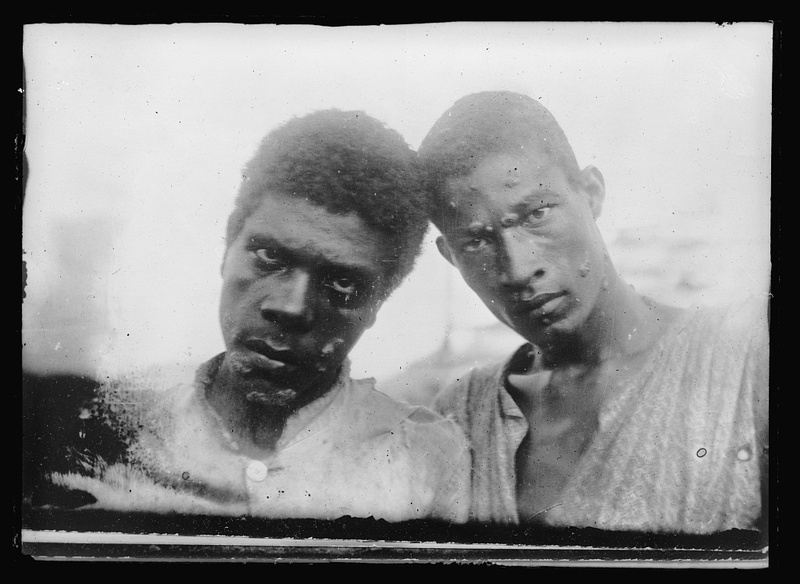 Though this photo was taken in 1920, after slavery was abolished, Yaws was still a relevant disease due to the destitute conditions Afro-Carribbeans were forced to live in.

Contributions to medicine should not be limited only to White Americans and Europeans. In 1773, on the small island of Grenada, a small group of slaves infected with Yaws were divided into groups, four were treated by two European doctors and two were treated by the resident enslaved doctor. The enslaved doctor’s patients recovered rather quickly, while the Europeans’ patients did not. Unfortunately, the doctor’s identity was erased due to his status as enslaved.

This was not the only known time Yaws was cured by an African. In the late, mid-18th century, it was revealed by an Afro-Jamaican, enslaved woman, named Clara, that Africans treated Yaws through vaccination during childhood. Vaccination would not be tested as a legitimate treatment until 1793, ironically after Edward Jenner began infecting an enslaved African population with cowpox. Again, because of her enslaved status, Clara was not credited and has mostly been forgotten. 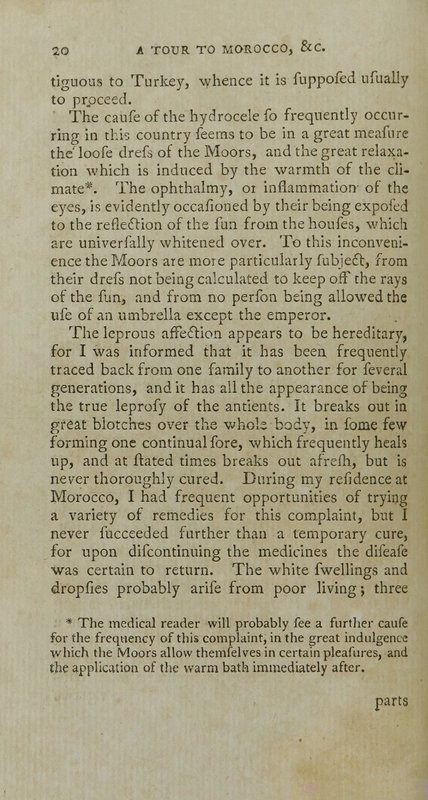 William Lempriere, A tour from Gibraltar to Tangier, Sallee, Mogodore, Santa Cruz, and Tarudant; and thence over Mount Atlas to Morocco. Including a particular account of the royal harem, &c.

Enslaved people were not only exploited by Europeans to make medical advancements, but for profit as well. During the Middle Passage, large amounts of captured and enslaved Africans were transported at one time to gain the maximum amount of profit in the American markets. Slavers would often overstock the ships because a sizeable number of Africans would die, mostly due to poor air quality, lack of exercise and proper food, and disease from poor living conditions. Medical care of these individuals was often neglected and bodies of the deceased were poorly discarded. 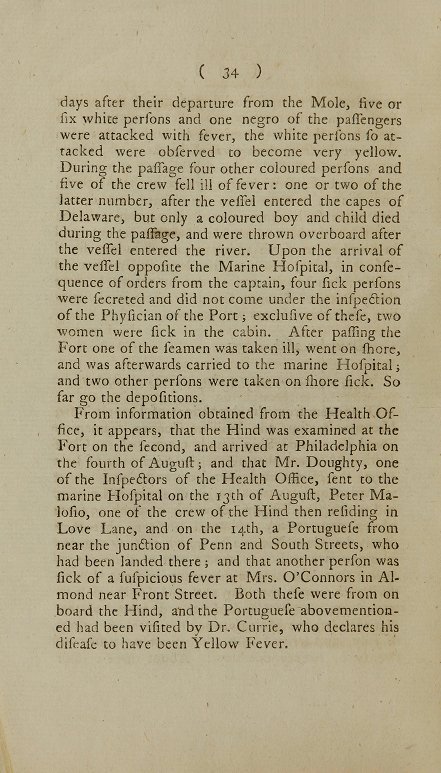 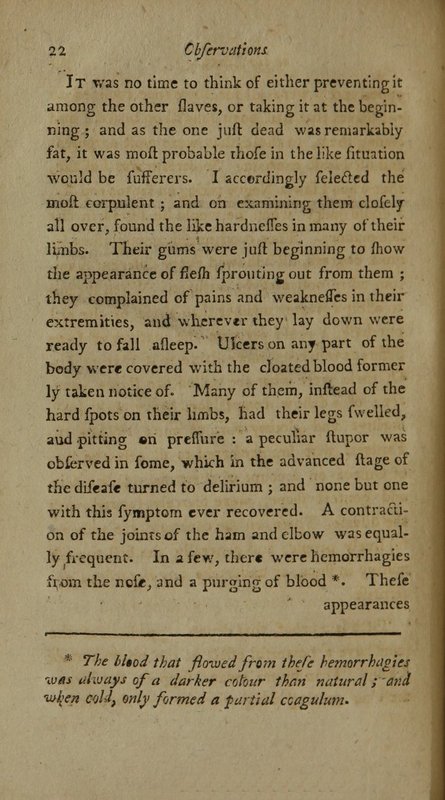 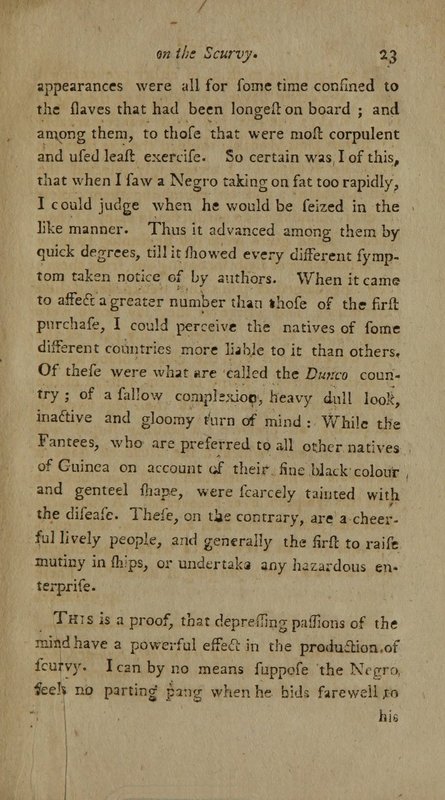 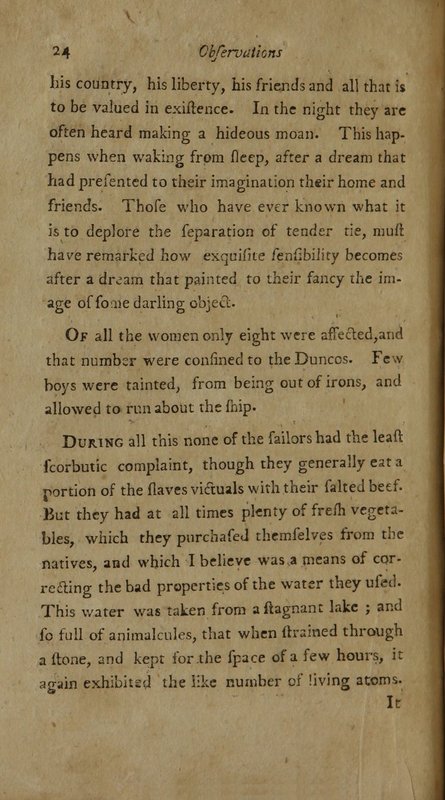 These pages are taken from Thomas Trotter's, “Observations on the scurvy: with a review of the theories lately advanced on that disease; and the opinions of Dr. Milman refuted from practice." Trotter was an esteemed medical reformer and abolitionist in the Scottish Royal Navy that traveled on a slave ship across the Middle Passage to observe its conditions. His account shows the routine mistreatment and disregard of captured peoples. Trotter described the symptoms of scurvy, a vitamin D deficiency, to legitimize his claims that this disease was indeed an extremely common occurrence aboard slave ships. His description of diagnosis (observing abnormal weight, limb stiffness, skin lesions) is still a commonly used technique today. Trotter also describes his observations on how enslaved Africans' bodies were disposed of during the Middle Passage.

Though Trotter himself was not enslaved, he provides a detailed, moment-by-moment account of the Middle Passage—a feat that, due to the conditions of slavery, would have been nearly impossible for an enslaved person to accomplish. Olaudah Equiano published his memoir in 1789 and was one of the only Africans to accomplish such a thing.