"To live in ease and plenty by the toil of those whom violence and cruelty have put in our power, is neither consistent with Christianity nor common justice..." 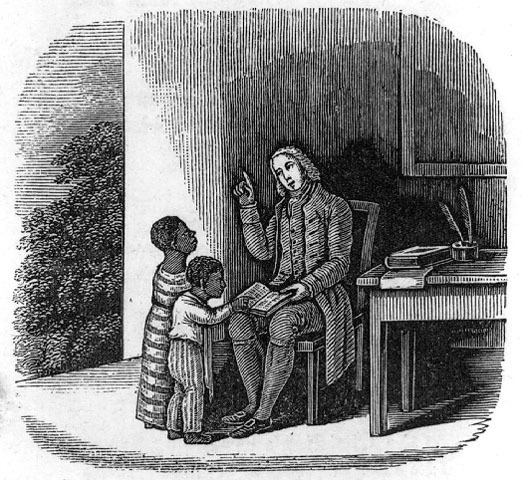 Anthony Benezet, born in 1713, moved to the American colonies at the age of two years old. Working as a school teacher, Benezet was a member of the Philadelphia Society of Friends and used his position to advocate for abolition. Anthony Benezet established schools for girls, the disabled, and freed slave children. Before the establishment of the school for freed slave children, Benezet tutored black children in his own home at night. He believed that the institution of slavery went against Christian ideals and values and that slave owners and propagators lessened their humanity by participating in the practice of slavery. Benezet spent time among the African American population in Philadelphia, becoming a well-known and respected member of the community to the point where over 400 African American citizens attended his funeral. 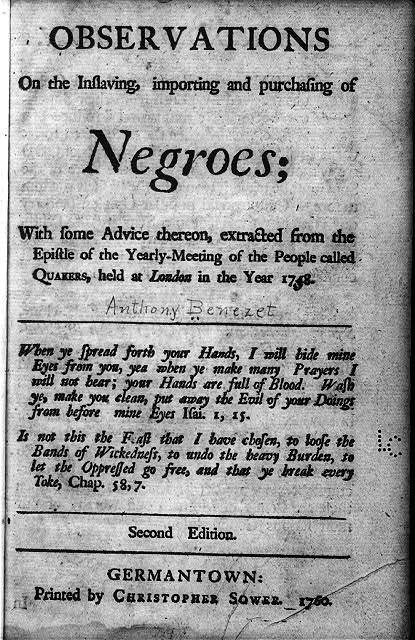 In 1759, a pamphlet written by Benezet for a London meeting of the Society of Friends presented his views on the institution of slavery. He claimed the practice of selling black men, women, and children and forcing them into lives of bondage was cruel, oppressive, and went against Christian doctrine. The document, whose full title is “Observations on the inslaving, importing and purchasing of Negroes with some advice thereon extracted form [sic] the Yearly Meeting epistle of London for the present year : also some remarks on the absolute necessity of self-denial, renouncing the world, and true charity for all such as sincerely desire to be our blessed Saviour's disciples”, even goes on to suggest that God will bring His wrath upon the nations that hold other lives in bondage. Benezet’s ideas on abolition were inspiring for those in the London community as well as his own.

Benezet contributed to the abolitionist movement even after his death in 1784. He willed money to the Society of Friends to continue instruction to black children and help fight the institution of slavery.