Thought leaders are those that influence the public through their opinions and outlooks. They are the people that start trends or that influence other people to begin movements of their own for future generations. The though leaders have developed their ideas from their writings, propaganda, or religious background to start the movements in abolition. Early thought leaders in England saw returning British citizens with their slaves after the American Revolution and it opened their eyes to the issue of slavery. Many of these thought leaders took from what they saw on their travels of where slavery was and got their motives for abolition in the Americas or Morocco. 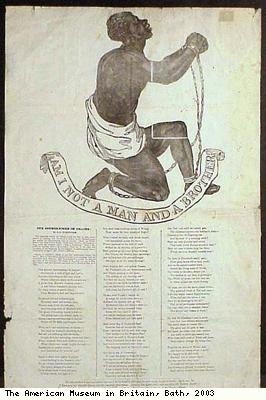 An Abolitionist Broadside against the Slave Trade

This exemplifies the collective abolitionist idea that slaves are men and humans too. Followed by a verse by J.G. Whittier, it shows a man kneeling asking for freedom.

These are portraits of the Sturge brothers that are published in two different areas of England and created by different artists. They also give a look at who the men were in relation to the works that they did for the abolition of slavery in Morocco and the United States.