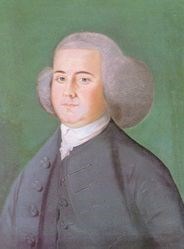 John Adams was the second president of the United States and a supporter of the abolishment of slavery.

John Adams, whom eventualy was elected president, was a Massachusetts lawyer whom found himself ever more involved in the growing discontent of the British policies concerning the governing of the colonies. However, he did always consider himself an honest man of law and offered his survices in the defense of the British soldiers that were involved in the "Boston Massacre". This belief in honesty and law would help him to create the Constitution of Massachusetts. He was also an important influence on the drafting of the US Constitution, with a number of his ideas being used in the final version such as a seperation of three branches of government.

John Adams was also against slavery on moral principle. He saw the colonies fight for freedom and their enslavement of peoples at the same time a contradiction. Thus, when the final draft of the Massachusetts Constitution was complete and accidently lead to the abolishment of slavery in that state, he was pleased by this.